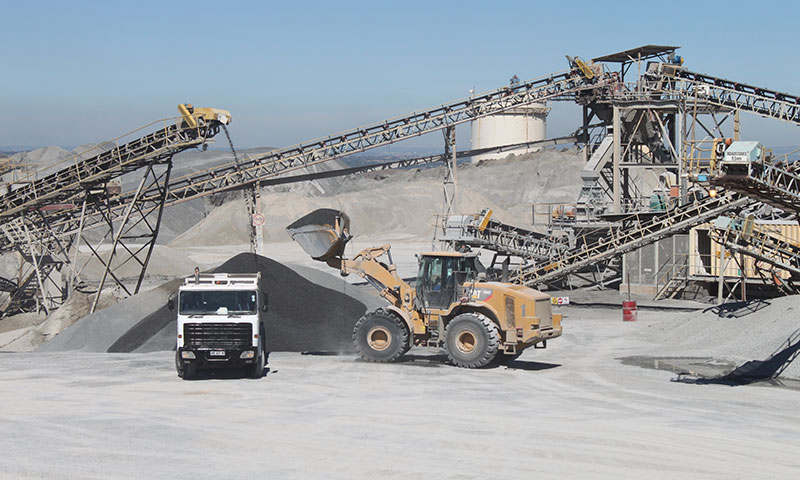 Mooiplaas Quarry’s fleet of five wheel loaders is loading a total of about 250 trucks per day at stockpiles.

Mooiplaas Quarry, a homogeneous dolomitic reserve, one of the very few in Gauteng, South Africa, is owned by PPC, one of the biggest construction material suppliers in Africa. While the quarry outsources most of its operational processes such as drill and blast, as well as load and haul, it also runs five wheel loaders of its own. The current fleet comprises three Caterpillar 966H and two Bell Equipment units.

Riaan Redelinghuys, Executive at PPC Aggregates, tells Equipment Africa that these units will be standardised in the next 24 months. He reasons that running different brands can be a challenge in terms of parts stockholding, as well as having to deal with various suppliers in terms of aftermarket support. The wheel loaders are loading a total of about 250 trucks per day at stockpiles.

A significant portion of operational processes at Mooiplaas Quarry are outsourced. Load and haul is subcontracted to SA Earthworks. Redelinghuys reasons that outsourcing these processes is aimed at a combination of downsizing the company’s fixed costs and reducing capital investments. However, he is of the view that when you outsource several processes of your operation, contractor management becomes extremely crucial.

For example, for load and haul, Redelinghuys says the quarry doesn’t stipulate what the contractor should use in terms of equipment. “We buy capacity from them,” he says, adding that SA Earthworks is tasked with putting a capacity of 550 tonnes per hour through the primary crusher. Additionally the quarry prescribes 0,30ℓ of diesel burn per tonne. To meet these obligations, the load and haul contractor is running, on average, two 40t Hyundai excavators, loading six 30t and 40t articulated dump trucks, a combination of Bell, Komatsu and Astra units.

Equipment Africa says: It makes sense for the quarry to consider running a single brand for its equipment needs. Parts stockholding and dealing with a single source of aftermarket support make life easier for any busy operation of this quarry’s nature.