Start-up quarry owner invests in a fleet of premium gear 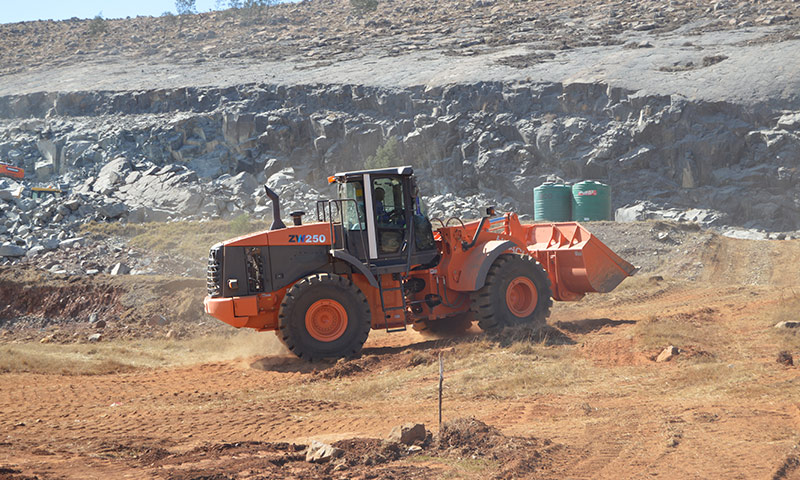 A Hitachi ZW250 front-end loader is used for stockpiling and loading customer trucks on site.

Based on the understanding that a premium product offers premium returns in the long term despite the large capital outlay required, Real Stone Quarries, a 100% black-owned, start-up quarrying company based in KwaZulu-Natal, South Africa, has purchased a premium fleet of equipment to kick-start its construction material business.

In stark contrast with the general belief that start-up companies, for a number of reasons, but mostly lack of access to funding, always look at cheaper plant options to break into this sort of business, Real Stone Quarries approached it with a clear mind that for its machinery needs, it would always consider tried and tested gear.

For that reason, the company has invested in its first fleet including a Hitachi ZW250 front-end loader and a Komatsu HM300 articulated dump truck. This is complemented by a mobile Kleemann crushing and screening train comprising the MC 110R EVO jaw crusher, an MC 095 cone crusher and the MS 16D triple-deck screen.

The Hitachi ZW250 front-end loader is being used for stockpiling and loading customer trucks on site. It is also deployed on a range of duties including platforming and clearing of the quarry floor.

The 30 tonne Komatsu HM300 articulated hauler is used for hauling crushed material from the screen to the stockpiles. “The fleet will expand as production increases. We will only target premium brands. It will likely be a duplication of the existing fleet,” says Dr Zakhele Buthelezi, managing director of Real Stone Quarries. 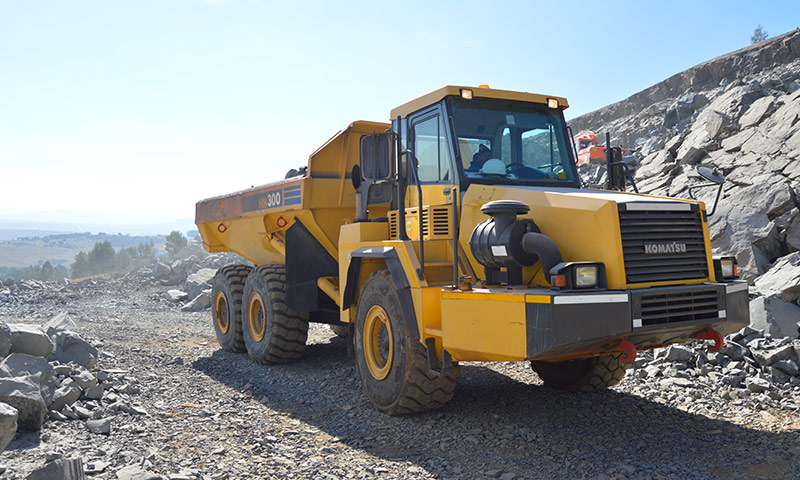 A 30 tonne Komatsu HM300 articulated hauler moves crushed material from the screen to the stockpiles.

A Doosan 225 excavator, the only outsourced piece of equipment on site, is loading the MC110R EVO jaw crusher, which in turn feeds into the MC095 cone crusher before material goes into the MS16D triple-deck screen for final particle sizes. The same excavator is also used to load the dumper in some instances where material needs to be hauled from the pit to the primary jaw crusher.

This fleet has been deployed at Real Stone Quarries’ Nquthu Quarry, the first in a line of quarry operations the company intends to open. It is located in the Nquthu Local Municipality, an administrative area in the Umzinyathi District of KwaZulu-Natal province. 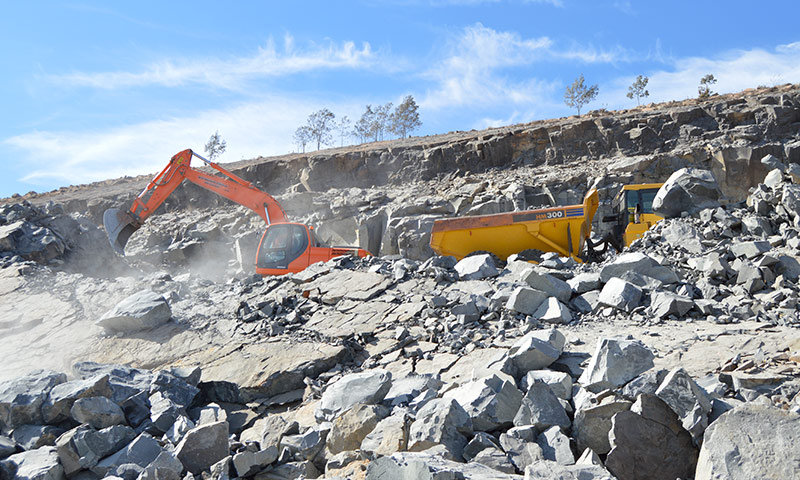 A Doosan 225 excavator loads the dumper inside the quarry pit.

Dr Vusi Sibeko, Corporate Affairs director of Real Stone Quarries, says that opportunity abounds in the area, especially on the back of new road and maintenance projects lined up. Prospects are further buoyed by social infrastructure projects in the pipeline, including schools and housing projects to be built under the Reconstruction and Development Programme (RDP). Nquthu Quarry is strategically located to service the nearby villages of Mondlo and Nkandla, considering that there is no other commercial quarry in the 70km radius, according to Dr Buthelezi.

Equipment Africa says: The role of onsite equipment, especially amid notoriously challenging operational conditions, is vital for any operation of this nature as far as productivity and efficiency are concerned. This is a philosophy Real Stone Quarries has grasped very well. Management reiterates that reliability and proven product support, not price, played a key role in buying decisions. 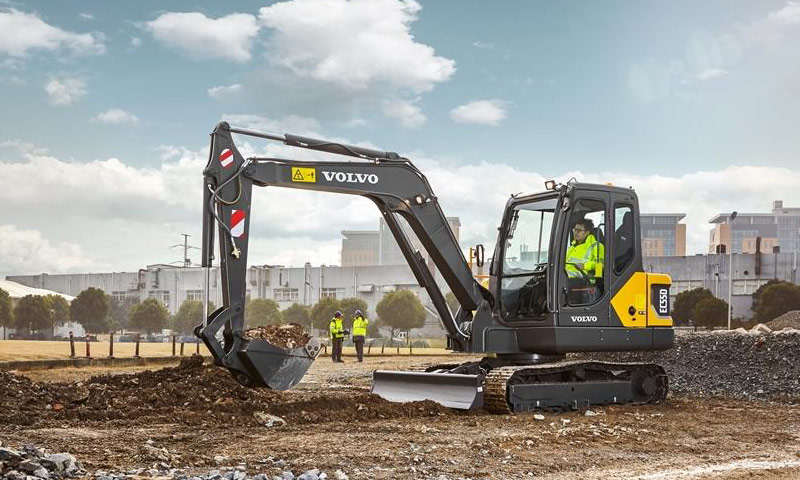 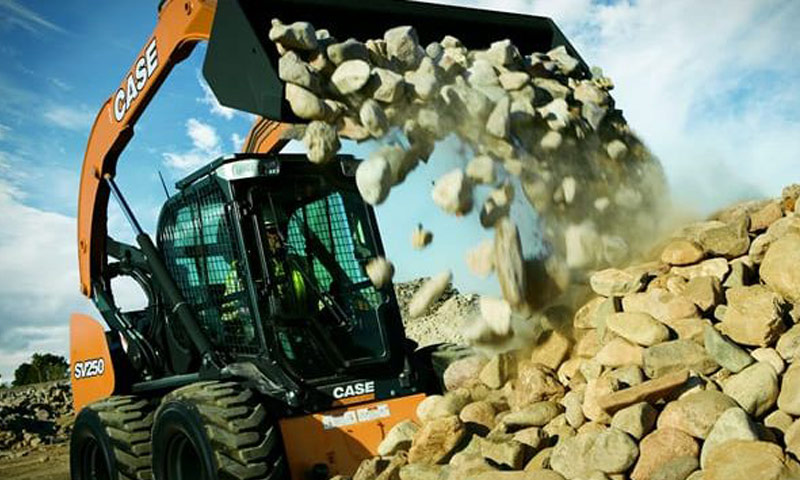 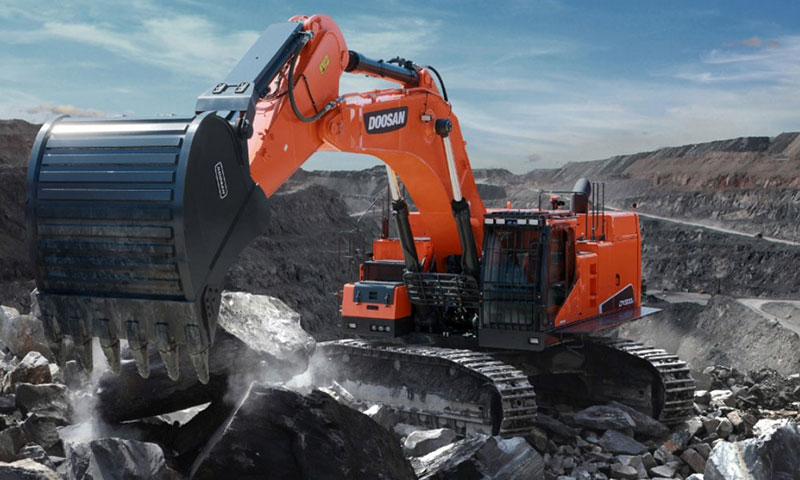