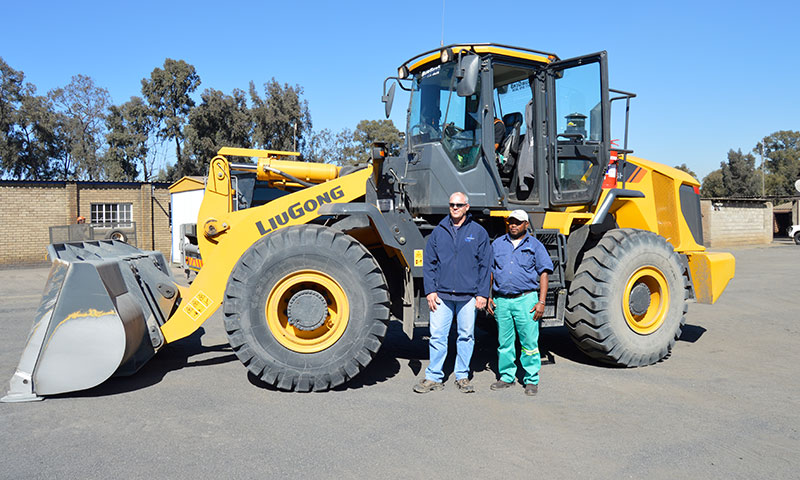 Afrigrit, a specialist in the rehabilitation of slag dumps and mineral separation, has expanded its fleet of LiuGong wheel loaders with the recent purchase of a new 17 tonne CLG856H model.

Supplied by Burgers Equipment & Spares, LiuGong’s authorised dealer in South Africa and Namibia, the new CLG856H loader joins an existing fleet of two LiuGong CLG856 loaders. The new acquisition brings the total number of LiuGong machines Afrigrit has operated to five, including the previous ZL50 wheel loader it bought a few years ago, as well as the LiuGong folklift carrying out various lifting duties at the company’s Witbank, Mpumalanga factory.

According to owner, Marius Pick, the first LiuGong machine Afrigrit bought was the ZL50 which supplied by the previous LiuGong dealer in South Africa. Aftermarket support and parts turnaround were issues that the company struggled with at the time. However, Pick says they ran the loader until it clocked over 18 000 hours.

Afrigrit decided to trade in its ZL50 for its first CLG856 loader in February last year. Ever since, it hasn’t looked back. In April the same year, the company purchased its second CLG856 machine, before extending the fleet with theCLG 856H at the beginning of July 2016. “The ruggedness and reliability of the machines in our dusty operating conditions, coupled with service and parts support from Burgers, have been great,” says Pick. “We have had a good experience with the loaders with no downtime experienced compared to the first one.”

For that reason, Afrigrit is looking at replacing some of its existing wheel loaders from some premium suppliers with LiuGong units. “We will probably replace some of the existing brands in our stable with LiuGong loaders. Some of them are becoming very expensive to buy and maintain. LiuGong machines are proving their worth, while they come at a very competitive price,” says Pick.

The two CLG856 loaders have been deployed at a contract off-site, working 12 hours a day. To date, the first of the two CLG856 units has clocked just over 6 000 hours, while the second unit has just gone over 4 400 hours. The CLG856H, purchased at the start of July this year, has been deployed for all loading duties at stockpiles at Afrigrit’s factory. This is a 24-hour operation and the loader is working round-the-clock, achieving 20 hours a day. Within two weeks of operation, it had already clocked in excess of 150 hours. 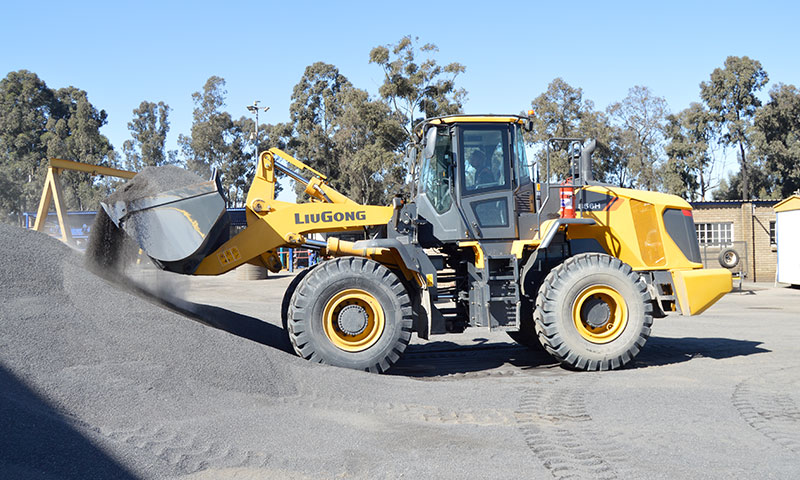 The CLG856H, purchased at the start of July this year, has been deployed for all loading duties at stockpiles at Afrigrit’s factory.

The loaders are kept in good operating condition through a strict service and maintenance regime. They are serviced at 250-hour intervals, which is often clocked within a two-week period. Fuel efficiency is said to be one of the biggest benefits of this range. The LiuGong CLG856 loaders are said to be consuming between 12,3 litres and 13,5 litres per hour

The new CLG856H is powered by a Cummins 6LTAA9.3 engine pushing 162kW at 2 200rpm. It is said to be a low fuel consumption engine that doesn’t sacrifice any power.  This is complemented by the reliable ZF 4WG200 automatic shift transmission with kick down for energy saving and efficient operation.

The CLG856H’s carrying capacity is said to have been improved by 40% over its predecessor model thanks to a redesigned and reinforced axle housing and main transmission system. The changes have also increased the average lifecycle of the machine 250%.

Pick is also impressed by the easy serviceability thanks to easy access to all the service-intensive components.

Equipment Africa says: Every machine is as good as its service. This is one thing Burgers Equipment & Spares understands very well. To date, the previous perception the market had about the LiuGong brand due to service flaws of the previous dealer has been completely changed. Afrigrit’s resolve to replace some of the existing brands in its fleet with LiuGong machines is testimony of Burgers’ service excellence. These machines are working in demanding applications over extended working hours, but due to proper service and support, they are surpassing expectations.