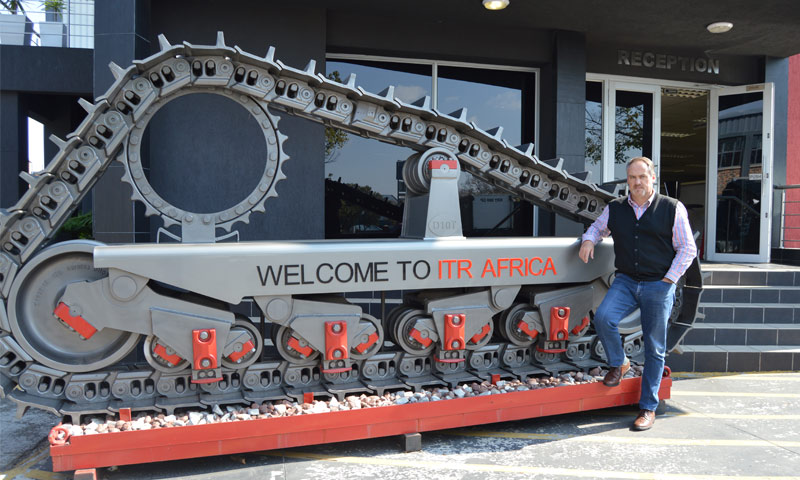 Managing Director Brian van Buuren says as the company seeks to increase its footprint in sub-Saharan Africa, it will partner with distributors in various countries north of South African borders.

Amid continued and forecasted growth in its sub-Saharan Africa market, ITR Africa, a leading manufacturer of undercarriage for all types of crawler equipment, a comprehensive range of GET products and engine repair parts and components for earthmoving machinery, has considerably grown its continental footprint.

With its headquarters in Benrose, Johannesburg, ITR Africa has recently established several branches of its own in South Africa. These are located in most major towns of Cape Town, Kathu, East London and Port Elizabeth.

“We have a strong footprint in the African region as well, which is also still growing. We have a powerful presence in the Democratic Republic of Congo (DRC), Mozambique and Zambia, mostly in the mining destinations,” says managing director Brian van Buuren. “We have a branch in Windhoek, Namibia, which is doing exceptionally well. We also have a distributor in Harare, Zimbabwe, which is also doing very well despite the current state of affairs in the country. As we seek to increase our footprint in sub-Saharan Africa, we are looking to partner with distributors in various countries north of our borders.”

From humble beginnings in 2009 with less than 20 staff members, today ITR Africa has a staff complement of 186 people. “We currently stock in excess of 20 000 line items across all our product ranges. Each product department is headed by a product specialist, all of them with more than 20 years’ experience in their respective fields. We have a fully equipped workshop at our Benrose site, where we have the capacity to undertake jobs such as turning of pins and bushes, lengthening and shortening of chains, as well as restriping of grouser shoes. We continue to grow in local customer numbers month-on-month,” adds Van Buuren.

Despite the current downward commodity prices, Van Buuren remains buoyant about the prospects of growth across sub-Saharan Africa. “It’s definitely a supressed market considering that mineral pricing is down. For example, in the DRC we deal with mostly copper miners and they have suspended some of their operations at this point in time. However, we feel a level of buoyancy creeping in from Africa and we are feeling the effects already,” he says. “We are fortunate that some of our local mining customers have also just clinched some mining contracts with major mining operations and we are feeling the benefits of these contracts as well.”

For Van Buuren, the outlook is very bright despite the current economic conditions. “We foresee a steady constant growth in the local market, there is still massive capacity for this. With our professional export department, we also foresee strong growth north of our borders in the next 24-48 months,” he says. “We see ourselves as very well positioned for the turn, when it does come. We have a massive appetite and excitement for growth in our markets moving forward and we are excited about the future of ITR Africa and the development and growth of our ever growing product range.”

Equipment Africa says: One of the biggest competitive edges for ITR Africa versus most of its competition is that it is a manufacturer of its own product. This, not only gives it a competitive pricing edge, but also total control over its product from a quality point of view, research and development and development of new products.