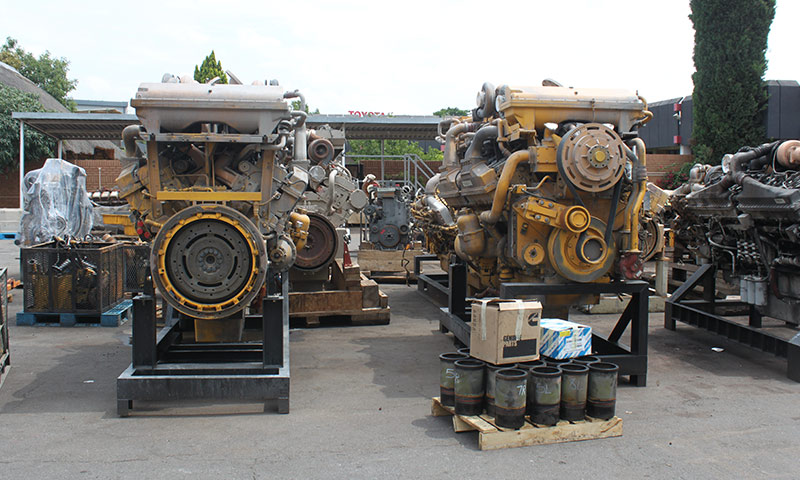 Cummins Southern Africa’s Master Rebuild Centre has been expanded to handle bigger engine ranges such as the 78-litre QSK78 which weighs in at 10t.

Cummins has increased its southern African remanufacturing capacity to service the expanding population of its high-horsepower engines due for rebuild as mines in the region seek to optimise the lifecycles of their equipment.

On the back of constrained mining markets, fleet operators are struggling financially to invest in new equipment needs. To increase the lifecycles of their equipment, overhauling of essential equipment components is becoming a popular norm. As a result, Cummins Southern Africa reports an increase in demand for critical rebuilds of high-horsepower engines.

To meet this increasing demand, the engine maker has embarked on a capital expansion programme to increase the capacity of its Master Rebuild Centre in Kelvin, Johannesburg, South Africa. It services the whole of southern Africa, including Botswana, Zambia, Mozambique, Namibia and Zimbabwe, covering mining and other high-horsepower applications.

“We are revamping the centre to accommodate the growing demand for engine rebuilds. We are expanding because we believe there is big opportunity for it,” says Schuyla Goodson Bell, managing director of Cummins Southern Africa.

Previously, Cummins Southern Africa experienced high demand to rebuild the mid-range and heavy duty diesel engines only. Since 2010 the company has experienced an increase in demand for the high-horsepower range spanning from the QSK 19 to QSK 78, according to Patrick Mohale, leader at Cummins SA’s Master Rebuild Centre. The mid- and heavy duty-range service exchanges are now done at a separate facility in Longmeadow, which was established in 2013.

Cummins Southern Africa’s high-horsepower facility was established as part of the engine maker’s international strategy, announced in 2012, to increase high-horsepower engine remanufacturing capacity by 100% to meet demand for “a rapidly expanding population of mining equipment powered by its popular QSK and K-Series engines”. At the time, the engine maker said it would double total high-horsepower rebuild capacity to about 7 000 units per year by 2016, compared with the 2011 capacity of about 3 500.

Cummins’ engine rebuild process is said to offer “as-new” reliability and life-to-overhaul, and also carries a new warranty of 12 months and unlimited hours. The high-horsepower range spans from 450hp to 3 600hp and encompasses engines with displacements of 19, 23, 30, 38, 45, 50, 60 and 78 litres.

The 3 366m² Master Rebuild Centre has an average production capacity of 12 engines per month. It has capacity for complete rebuilds, partial rebuilds, warranty repairs as well as fix-as-fail services. “Fix-as-fail is when the engine fails at the mine site and has to come back to us. We troubleshoot to understand why it failed and we replace what is damaged,” says Mohale.

The facility also has the ability to dyno test every engine after rebuilds to ensure engine performs to specification. To cater for this, Cummins Southern Africa has invested in two dyno testing cells (800hp and 4 650hp).

To cater for increased demand for high-horsepower engine rebuilds, the Master Rebuild Centre has been revamped at a capital cost of about R5,4-million. This is basically to accommodate bigger engines such as the QSK78, which weighs in at 10,2 tonnes. “We did not have the right sized overhead crane. We are buying a 15t crane to cater for the bigger engines,” says Mohale.

Equipment Africa says: Engine rebuilding is gaining momentum. Equipment users understand the importance of preserving their investments by extending their equipment’s life by having it rebuilt. Rebuilding improves the machine’s dependability while increasing productivity and lowering production and operating costs. Cummins is positioning itself to be able to cater for this increasing need.